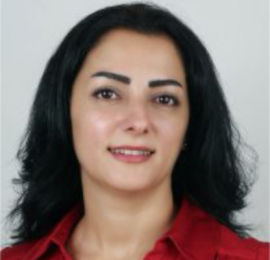 Bissane El-Cheikh is a Lebanese Journalist and writer.
She worked with Al-Hayat newspaper between 2001 and 2018, where her main focus was field reporting and investigative journalism both in her home country Lebanon, and the Middle East. She is the co-author of the book “Shu’ub al Sha’ab al Lubnani” (The Many Peoples of the Lebanese People), Al Saqi (2014) along with Hazem Saghieh. She reported from war zones in Lebanon, Iraq and Syria and conducted special reports from Jordan, Iran, Tunisia, Turkey, among other places. She wrote and produced two long documentaries “Tariq Al Muhajereen” (Lebanon, 2014) and “Imane and Sanaa, Al Quaeda Twins” (Morocco, 2010). She was a visiting scholar at the Woodrow Wilson International Centre for Scholars in Washington D.C (2008). In 2015, El- Cheikh taught Investigative Journalism to MS Students at the Lebanese American University of Beirut. Since 2007, El- Cheikh has been working as a media trainer and consultant with local and international media organizations. She is a volunteer mentor with the Marie Colvin Journalists’ Network.
El Cheikh has lived in Istanbul, Turkey since 2016.